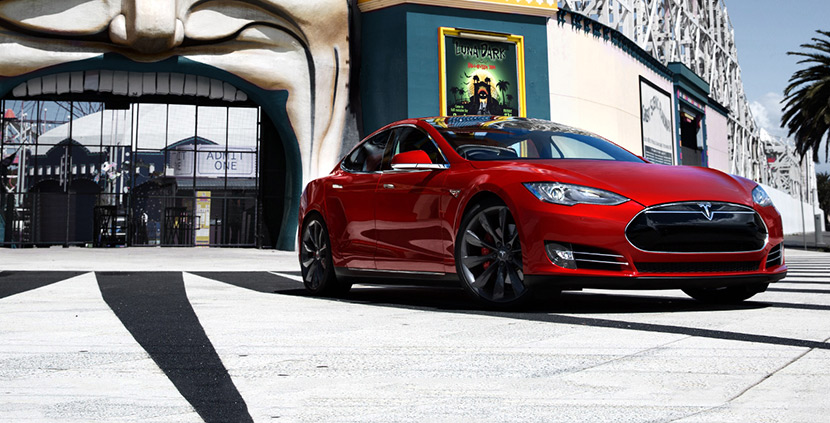 Effortless torque makes the Model S very tame to drive, until the user stomps on the accelerator pedal. Then it’s a rabid thing of voiceless fury.

The all-electric sedan has grabbed headlines all around the world. But behind the hype, the reality is it is a game-changer. The product of a fledgling car company, it has nonetheless set the tone for the next generation of automobile evolution. Companies with 100-year histories are scrabbling to catch up.

It’s done so with innovative technology and a fearless desire to sidestep existing practices – but only where necessary. Model S is conventional in its looks but ultimately unconventional in its execution. In addition, it’s our Best Green Car of 2015 – but a green car that can out-accelerate all but the very quickest supercar.

carsales judges praised the Model S for its advancement of technology, sorted driving dynamics and realistic real-world range – in top-spec more than triple that of other all-electric vehicles.

Yes, you do need to have access to Tesla charging station infrastructure, but for a large percentage of Australian drivers that means the ability to charge at the office or at home. As our own experiences in Tasmania bore out, the current infrastructure situation for longer trips is far from perfect. Perhaps a parallel is the early days of petrol cars – back when there was a necessity to carry spare fuel.

And if you’re going to throw the “coal-fired car” argument at us, don’t bother. World-acknowledged experts on EV and fuel cell vehicles are adamant even ‘dirty’ electricity is a magnitude better in CO2 terms than conventional petrol and diesel vehicles. It’s worth noting a Tesla charger powered by solar will produce no CO2 emissions a fact that cannot be achieved by a gasoline alternative.

Away from the EV vs IC argument, the Tesla’s quality construction and user-friendly infotainment interface were also commended by our judges. So too was the Model S’ quiet ride and spacious cabin. Better yet you can easily have a Tesla charging station installation at home meaning you leave your house with a full Tesla charge every day.

It’s not perfect – but as a first ‘mass market’ product, Model S is very good and priced competitively against its luxury opposition. Thus, right up there with the best of the conventional vehicle eligible for judging in 2015, the Model S delivered on all our data-based criteria. It was very close to being named one of our Prestige class winners in addition to the Green gong.

We fully expect to cop flak for our decision to award the Model S 2015 carsales Car of the Year but that won’t change our decision.

Model S is a deserved winner, and truly a car the will change the shape of the Australian automotive landscape.

The 2021 Hyundai Kona has made its debut in Europe revealing a few updated styling and performance changes. The predecessor Kona EV has been extremely successful in Australia since its launch. The Hyundai Kona EV was one of its kind in the Australian market as it was the only option for anyone who is looking […]
Read More

“The world is going to need more copper and nickel for more renewable power and electric vehicles, iron ore and high-quality metallurgical coal to produce steel for infrastructure – and that includes infrastructure for decarbonisation – and potash for sustainable global food production” BHP chief executive Mike Henry. BHP is preparing for the future with […]
Read More