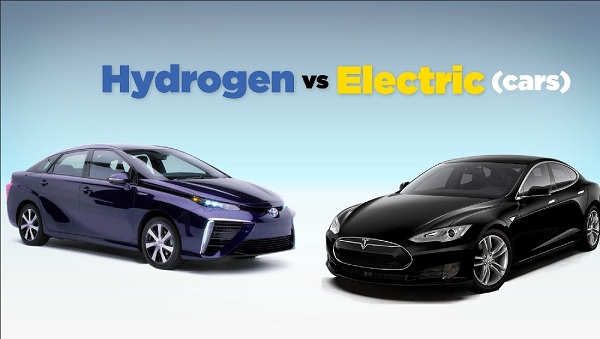 Many Car companies are hedging their bets on new technologies with many car companies such as Nissan and Daimler building both Electric Cars & Hydrogen  fuel cell cars.  Daimler CEO  Dieter Zetsche says he believes EVs are “more likely” to emerge as the next generation of clean cars. He believes the electric car has greater benefits with with long range and fast charging, he quotes ” while it’s still not clear how you’ll make hydrogen both cheap and widely available. their future isn’t looking good.

Let’s have a closer look at the two products

How Does an Electric Car work?

In an electric car, recharagable batteries act as the fuel supply and provide the motor with energy to move the vehicle. This gives the car acceleration.  When the vehicle is idle there is no electrical current being processed, so no energy is being used by the engine. They’re almost completely silent, and deliver an instant torque sensation. Electric cars do not require oil changes, because there is no oil used to run the engines. Same for fan belts, air filters, spark plugs or any of other parts that need occasional replacement in a gasoline car. Even the brakes on an EV last longer than a gasoline car because EV slows the car by reversing the electrical motor instead of applying mechanical friction. This regenerative braking helps to recharge the motor while a daily plug into to a home electric car charger refuels the cars.

Up to 80 percent of the energy in the battery is transferred directly to power the car, compared with only 14-26 percent of the energy from gasoline-powered vehicles. It’s this aswell as the ability to generate from large scale electricity supplies that make Electric Cars a greener alternative to gasoline cars. Using a home Electric car charging station or DC fast charger allows electric cars to seamlessly replace petroleum cars.

Fuel cell vehicles use hydrogen gas to power an electric motor by combining hydrogen and oxygen to produce electricity, with only water and heat as a byproduct. Technically they’re powered by electricity & considered electric vehicles EVs. Since they can be refulled , their range processes are comparable to conventional cars.

However to produce the hydrogen itself can lead  to pollution, but even when the fuel comes from one of the dirtiest sources coal powered power plants to produce the hydrogen fuel cell, the result is still a 30% drop in emissions. hydrogen efficiency is the real issue with electric cars making use of 77% of the available energy while the Hydrogen vehicle once we account for the production of the Hydrogen sits at between 20-30%. A very low number. Electric cars use a standard AC electric car charging station making the infrastructure and transfer of wholesale electricity very efficient.

Currently looking at the trend of investment of Electric Cars vs Hydrogen Fuel cell cars the car industry is spending almost 10x on electric car when compared to hyrdorgen equivalents. Hydrogen fuel cells sound cool but its economic practicality is very dorky

What is the cost of charging an electric car?

After recent events many Victorian electric car owners can’t wait to get back behind the wheel and get out to explore the best that their state has to offer. Given that QLD has closed their borders, Victorians will be looking to holiday closer to home with a good old fashioned road trip. We’ve put together […]
Read More