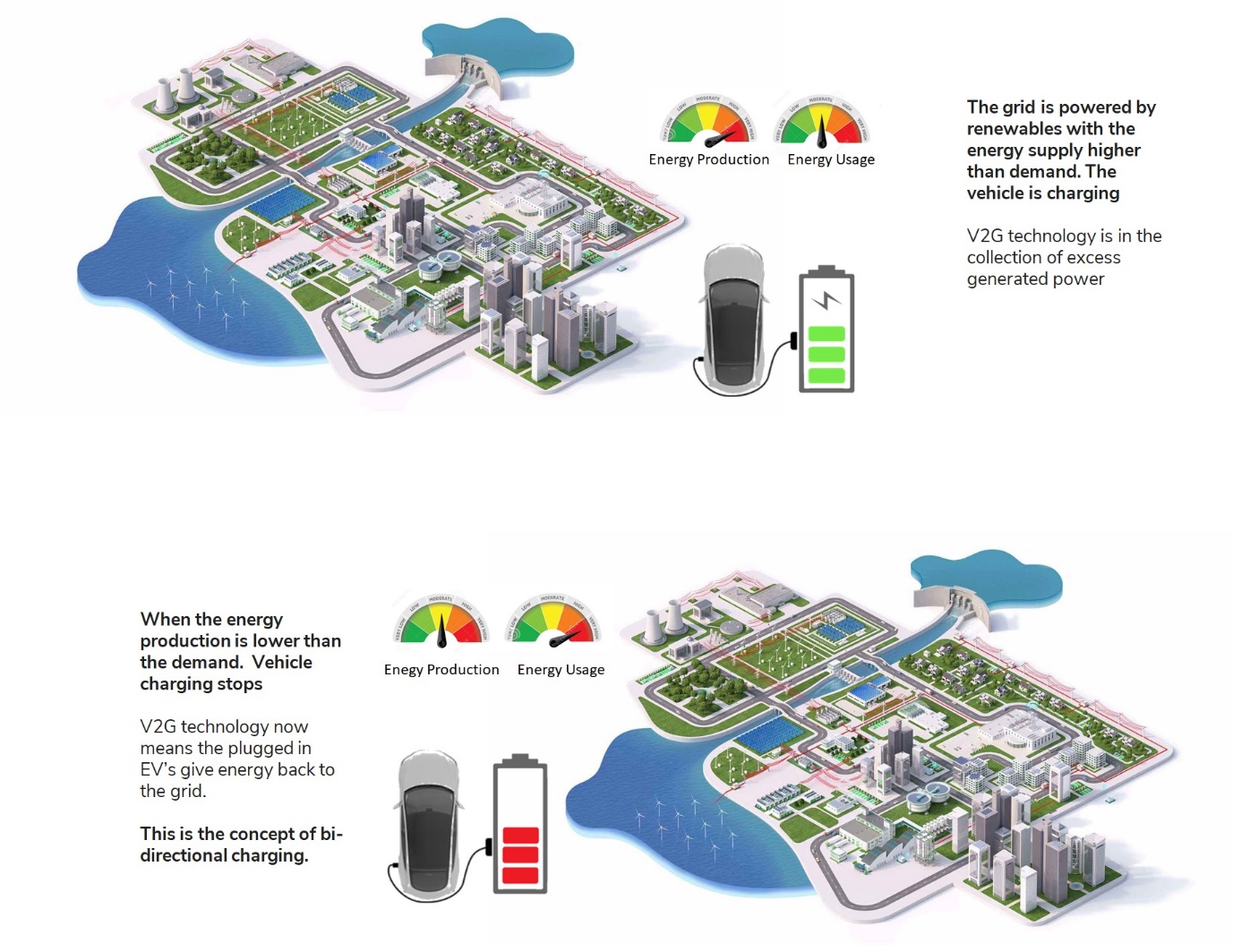 V2G- Vehicle to Grid – The Future or Expensive Failure?

The majority of EV’s spend around 23 hours of the day stationery. What if we could use this time for temporary stationary storage? What if the energy stored in your vehicle battery could be returned to the power grid at times of increased energy demand? What if you could supply your home entirely with your own solar power?

This is the vision behind the high-tech Vehicle-to-Grid (V2G) charging and Vehicle-to-Home (V2H) solutions; a vision which we, at EVSE Australia strive towards implementing.

What is Bi-Directional Charging?

It’s essentially connecting an EV to the network grid. Electricity can then be sent to the EV battery or electricity can be taken from the car battery and distributed back to the grid.

To make V2G a reality we need to implement a few things.

As amazing as it sounds, wind turbines can remain motionless for days on end, but not due to a lack of wind. Quite the opposite: wind turbines have to be turned off if they produce more energy than the power grid can accommodate. What if V2G enables renewable energy to be put to better use?

A Battery on Wheels

Supply and demand. If electricity production exceeds demand, electricity prices fall on the national energy market. A perfect time for your electric car battery to store this low-cost energy. Conversely as shown in the figure above, if demand increases, this energy can be fed back into the power grid in return for a profit.

Energy control in the smart home

Modern EV’s have battery capacity greater than 40kW while most home systems are less than 10kW. Electric cars are sufficient to supply one household with power for several days, Vehicle-to-Home (V2H). With larger battery packs there is increasing availability for these batteries to be used to support the Grid/Home.

Using the AC charging infrastructure as opposed to DC has many advantages with the biggest being cost and availability. Having an on-board charger/inverter drawn to V2G, adaptation and cost on the infrastructure side are minimal.

It comes down to cost! For every 1x 50kW DC Charger, you can purchase over 18x 22kW AC Charging Stations (excluding the cost of installation). This means you have the capacity and the scale to implement V2G charging. Let’s remember 95% of EV charging is through AC EV chargers. Furthermore, a DC Charger is installed to deliver a quick charge. You will not have excessive vehicle downtime across any major DC network.

Will Battery Life Be Affected

Using EV’s as grid storage can impact battery longevity as they have a finite number of charging cycles. Battery life is a complex function of chemistry, temperature, age and discharge rates. Most studies with slower discharge rates show only a few percent’s of additional degradation, another potential benefit of AC charging.

There is some scepticism among experts about the feasibility of V2G and several studies have questioned the concept’s economic rationale. Much of the scepticism comes from valid and rational arguments including battery degradation outweighing the economic benefits. The high cost of V2G infrastructure (especially DC) and loss of electricity when inverting the power from DC/AC.

While much of the criticism is valid and true, V2G represents the future as the increased integration and networking of our energy and transportation system will demand the higher utilisation of resources including batteries. Expensive….Yes, Failure….No.

Australia has been slow to embrace the electric car revolution, but as world oil prices increase, more and more drivers are expressing interest in purchasing electric cars and 2022 promises to witness an exciting influx of electric vehicles into the Aussie auto marketplace. The country’s hesitancy to trade in their gas-guzzling autos for electric or […]
Read More