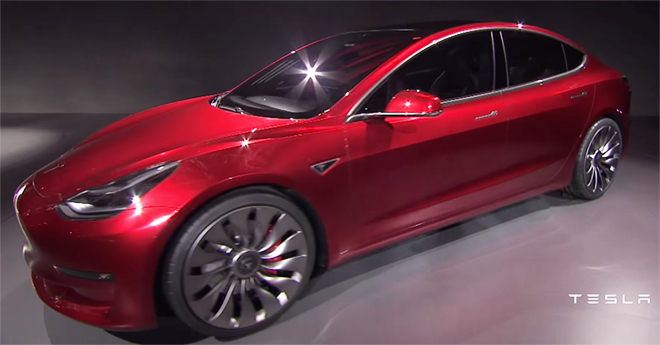 The next era of automotive history began last night at the Tesla Design Studio in Hawthorne, California, as the company unveiled its long-awaited Model 3, and hordes of buyers around the world put down deposits to reserve their copies of the new EV, sight unseen.

Elon Musk began the presentation with a synopsis of Tesla’s mission to accelerate the world’s transition to a sustainable transportation system, and his not-so-secret three-step plan to bring EVs to the masses. He graciously thanked buyers of the existing Model S and X for financing the development of “the final step in the master plan: a mass-market affordable car.”

The auto punditocracy has long been skeptical that Tesla would be able to hit the “magic number” of $35,000. Of course, those of us who have read Musk’s writings knew that the Model 3 would be produced at a moderate price or not at all (even if the definition of “moderate” did expand from $30k to $35k along the way).

However, playing bait-and-switch games with pricing is an auto industry specialty, and some speculated that Tesla would present a “base” model at $35k that lacked the amenities everyone wants. In Australia this will probably translate to over $70,000 and no access to Tesla suprchargers. You will however still receive a Tesla portable charger  & the Tesla wall charger

Not so. The Iron Man assured us that every Model 3 will come with the features that make a Tesla a Tesla:

Finally, to cries of “You did it!” the first three threes rolled onto the stage. We’ll leave a detailed description of the styling to others, and just say that it looks to us like a slightly foreshortened Model S. Two causes for celebration: The faux grill in the front is gone, and the huge touchscreen remains.

Elon said Tesla’s Fremont factory is capable of producing 500,000 of these babies per year. The reservation list opened in the morning for those willing to wait in line at one of Tesla’s retail stores and online orders opened an hour before the show. 115,000 people had already plunked down their $1,000 deposit by the time Musk finished his presentation.

Deliveries are to begin at the end of next year. Elon is able to joke about Tesla’s record of missing deadlines, saying with an impish laugh that he feels “fairly confident” that the deadline will be met.

How Much Would You Save if You Own an Electric Car?

The general public is constantly debating the advantages and disadvantages of electric vehicles versus petrol cars. Costs quickly become one of the most critical things that people discuss. Do electric vehicles actually save money? What’s the cost per km of an electric vehicle compared with a traditional fuel-fed car? Is it really worth it to […]
Read More

Why every workplace needs an EV charging station

Many companies today are taking steps to reduce their environmental footprint. Whether it be using biodegradable plastic bags in the office or switching to LED lights, every action, no matter the size, can make a difference in contributing to a green and sustainable future. If you’re a business owner who’s looking to improve your sustainability […]
Read More