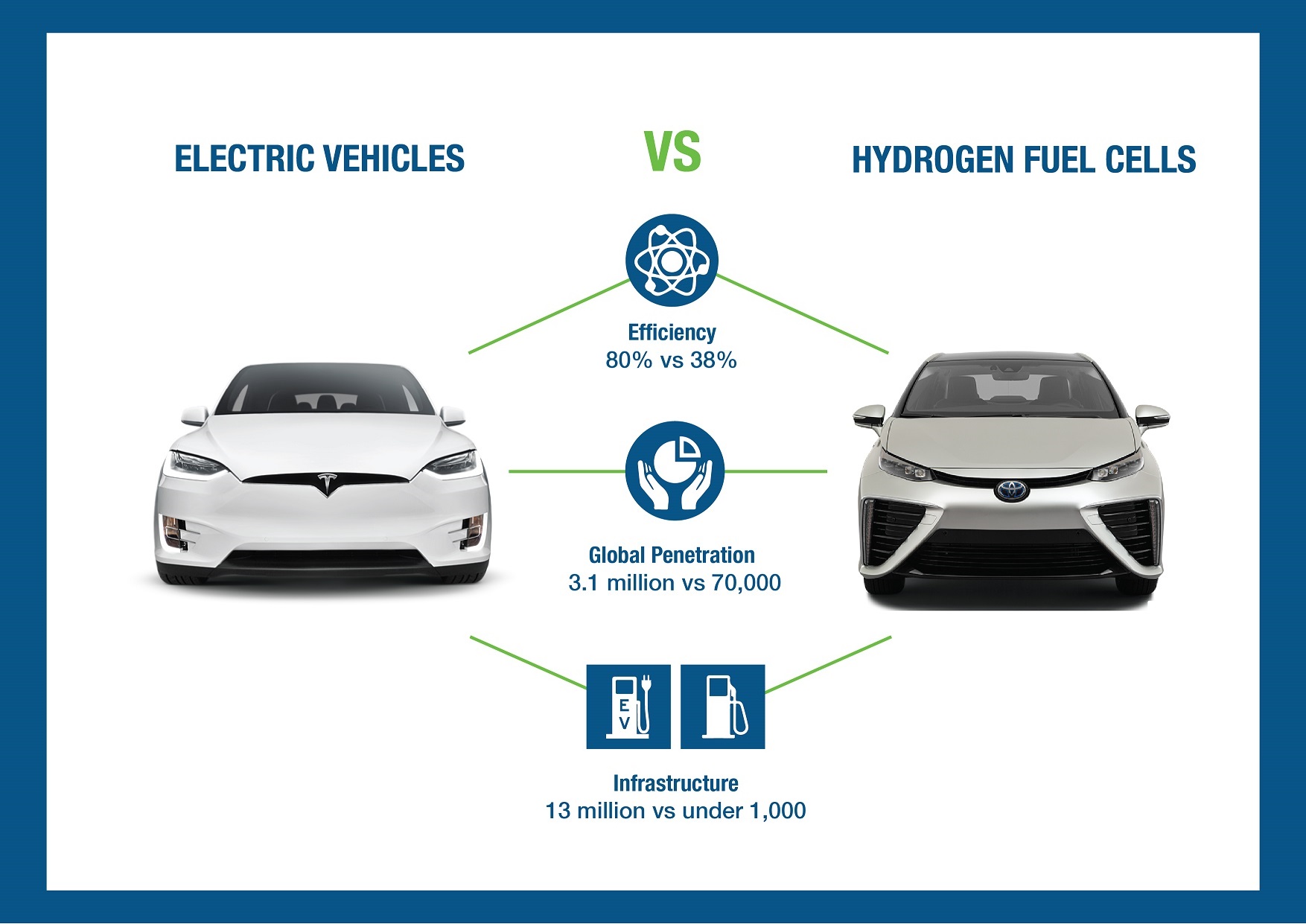 We’re hearing news of Green Hydrogen, Blue hydrogen and massive investment in Australia for Hydrogen fuel. But the reality is that the application and use of Hydrogen in electric vehicles will be limited and essentially unviable. With significant headwinds from a scientific and global penetration level, the viability of Hydrogen cars must be called into question to help avoid billion-dollar whales which take investment away from commercially viable technology.

Inefficiency is the Hydrogen Fuel Cells downfall providing only 38 watts per every 100. AKA a fail in schools across the world.

You can’t fight Science. Ask the climate change sceptics and Hydrogen unfortunately has 1 very big problem with its Science. It’s inefficient compared to battery electric vehicles. The reason why hydrogen is inefficient is because the energy must be transferred from wire to gas and then back to wire in order to power a car – known as the Energy Vector Transition.

As an example lets take 100 watts of electricity produced by a renewable source such as a wind turbine locally. To power a Hydrogen Fuel Cell Electric Vehicle, that energy has to be converted into hydrogen. This is estimated to be 75% energy-efficient, meaning that 25% of electricity has already been lost.

With electric vehicles, the energy runs on wires all the way from the source to the car. The same 100 watts of power from the same turbine loses about 5% of efficiency in this journey through the grid. You lose a further 10% of energy from charging and discharging the lithium-ion battery, plus another 5% from using the electricity to make the vehicle move. So you are down to 80 watts or a Distinction on the university scale.

In other words, the hydrogen fuel cell requires double the amount of energy. To quote BMW: “The overall efficiency in the power-to-vehicle-drive energy chain is therefore only half the level of an electric vehicle.

In Australia we unfortunately already rely on excessive amounts of fossil fuels and have a high output of CO2. By moving to hydrogen we would effectively have to further increase our output of renewables to offset the increase in electricity they require. Hydrogen technology requires double the electricity demand to power the vehicle and thus, will theoretically require twice the electrical infrastructure to operate the vehicle, in comparison to EV’s. Furthermore, when you purchase Hydrogen fuel cells this extra electricity cost will surely be passed on, losing all the benefits of cheaper electricity.

It is estimated that 2020 saw plug-in electric light vehicle (PEV) sales of around three million units.  Electric vehicle sales globally are surging only being held back by the availability of lithium

Many governments have put forward green stimulus packages during the pandemic, many of which were directed towards supporting the automotive industry and securing jobs in the sector, with an emphasis on the clean transition. With the abundance of infrastructure, increased supply of Lithium and government mandates EV’s are only increasing in popularity and have reached penetration of 50-80% in European markets.

Unfortunately, with only a small number of hydrogen vehicles sold globally in 5 years the commercialisation of the technology appears limited. Essentially the “market” is not responding to the product. High costs and a lack of Hydrogen supply infrastructure appear to be the big roadblocks. Toyota labels Californians who buy Hydrogen cars “trailblazers” that’s probably because they’ll need a map, a hope and a prayer to make it to the next location. Unlike a battery EV you can’t just plug into a PowerPoint in an emergency.

3.Lack of Infrastructure is killing Hydrogen

As a pioneer in the EV charging industry within Australia, a lack of infrastructure is something very familiar to me. However, Hydrogen has a hurdle even EV’s don’t have in the form of specialised & expensive equipment required to fuel/power these vehicles.

Unlike EV’s, a power point is not an emergency escape and we need to recreate 100 years of infrastructure in a few years to make it a success. Most EV’s in Australia use an electric car charging station at home or work using cheap household electricity. Hydrogen cells require expensive equipment. High electricity input and then to be sold commercially. This means the cost of refuelling will be similar to a petroleum driven vehicle. So we upgrade to fuel cells and pay the same or more at the pump??? Let’s try and sell this to Australians and see the end result.

What’s the biggest driver of consumer decisions in Australia? Cost, and then the environment…..and nothing in the industry pipeline indicates this will come down to the point of being competitive or better for the environment.

Finally, with EV’s we are using existing infrastructure to provide charging stations and then building specialised high-powered units to deliver these as a way to easily meet the needs of consumers. While I admit that Hydrogen might currently be a better option in heavy vehicles this alone will not be sufficient to maintain and propel the industry. As battery technology becomes lighter and carries greater output, the viability of heavy vehicles will also improve. We can only build charging in scale and not as a specialised solution for heavy vehicles. Therefore BEV will win this race also.

Green, Blue or Brown Hydrogen is no competition to Green battery powered EV’s. It’s time we stop investing in technology that has no market viability and invest in the future of electric mobility. Hydrogen has massive hurdles to overcome. EV’s admittedly had a science problem until Lithium came to the market and Fuel cells will need a Eureka moment before it can even start to dream.

“Experience the future at your fingertips” – that’s how the German manufacturer describes the new BMW i3. Packed with innovative technologies, the new BMW i3 is all set to elevate your everyday driving experience. The 2021 model has brought significant changes to the i3, including the increased use of eco-friendly materials for the components. There […]
Read More