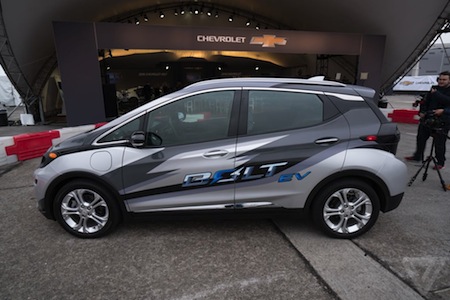 The report predicts that EVs – that is both hybrid and pure electric cars – will make up more than one-quarter of the global car market within just 10 years, their numbers growing from around 1 million today to around 25 million in 2025.

“Over the next 10 years, our sector analysts forecast sales to increase by a (compound annual growth rate of 26 per cent, expanding market share from 3 per cent today to 22 per cent in 2025,” the report says.

But as the report also notes, such significant market growth will require equally significant changes to key market drivers like cost and performance, before consumers will become inclined to make the change. Fortunately, Goldman auto analysts believe these changes are underway, courtesy of four key technological shifts, illustrated in the graph below. They also mentioned a need for electric car chargers to become prevalent across all markets to enable the easy adoption of the technology.

As you can see, Goldman analysts predict a 60 per cent plunge in battery costs over the next five years – from $14,250 today to $5,250 in 2020 – and a 70 per cent boost to EV performance, including battery range, weight and capacity. They also predit an increase in EV charging speed

The graph also shows that analysts believe the range of a low-performance electric car battery – currently around 160km and a key barrier to mass market adoption – will increase to an average of 275km by 2020.A Tesla using the network of Tesla charging stations can already travel across the Eastern seaboard of Australia.

The average capacity of an EV battery, meanwhile, is forecast to increase by 10kWh over the same period, while the average battery weight is expected to be cut in half – from 250kg now to 120kg in 2020.

Alongside falling battery costs and vast technological improvements, the report also highlights the importance of favourable “sub-nation regulatory” support in the uptake of EVs and the shift away from hybrid models and towards pure electric “grid-connected” cars.

“In London, for instance, the Ultra-Low Emission Zone will from May 2016 onwards no longer exempt hybrid vehicles from the Congestion charge,” it notes.

“Similar policies, favoring grid-connected vehicles over hybrids have recently been put in place in California and Beijing.”

Should your workplace or business invest in an EV Charging Station?

Should your workplace consider EV charging stations for employees and visitors? When we look at where most EV drivers charge their electric cars, it is clear that the vast majority of EV charging will be done at home overnight on home EV chargers. This makes a lot of sense given that most electric cars will […]
Read More