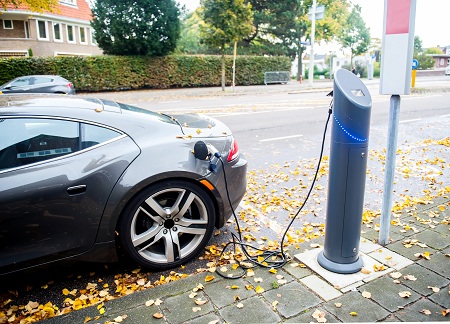 10 Reasons to Own an Electric Car

10 Reasons to buy an Electric Vehicle

2: ELECTRIC CARS ARE QUICK!
Most electric cars are extremely quick! EV 0-60 times are very impressive, and if it were not for the massive weight of the batteries they’d blow away even the best 12-cylinder supercars. The Tesla Roadster is crazy-quick with a 0-60 time of just 3.7 seconds.
3. ELECTRIC CARS POLLUTE LESS
•Critics who are totally ignorant on the subject claim that electric cars pollute just as much because the electricity has to come from somewhere, and it’s usually from coal-fired power plants. Even if 100% of our electricity came from coal power plants it would still result in far less pollution compared with everyone having their own gas powered engine in their cars. The truth is that it is far more efficient to generate large-scale power from a single power station than from 500,000 individual internal combustion engines. Additionally, much of our electricity comes from hydro, wind and solar sources which are clean. According to a range of studies doing a ‘well to wheels’ analysis, an electric car leads to significantly less carbon dioxide pollution from electricity than the CO2 pollution from the oil of a conventional car with an internal combustion engine. You can also use solar powered electric car charging to porivde 100% clean energy
•The Australia climate institute shows how Australias energy mix is becoming cleaner
4. It’s Easy to stay charged

Most people charge their EVs at home overnight. Charging EVs in public is also getting increasingly convenient. Many workplaces and businesses have installed a public EV charger along highways and at stores and offices, some businesses and agencies are installing fast- charging stations that can re-charge a car to 80% of battery capacity in less than 30 minutes. Considering you park your car at home or in the office, a constant supply of electricity should be available

5. Cheaper to Service
Electric cars are cheaper to service because of the simplicity of the electric motor that drives it. The motor contains perhaps half a dozen moving parts, as compared to the hundreds of working parts in an internal combustion engine.Electric cars do not require oil changes, because there is no oil used to run the engines. Same for fan belts, air filters, spark plugs or any of other parts that need occasional replacement for a gasoline car. Even the brakes on an EV last longer than a gasoline car because EV slows the car by reversing the electrical motor instead of applying mechanical friction. This regenerative braking helps to recharge the motor!
6. Unlike gasoline-powered vehicles, electric cars emit no tailpipe pollutants when running on electricity – Meaning less pollution in large cities
7: Electric vehicles are a highly efficient mode of transportation. Up to 80 percent of the energy in the battery is transferred directly to power the car, compared with only 14-26 percent of the energy from gasoline-powered vehicles.
8: Your Electric Vehcile can replace your current car
The range of most electric cars is plenty for daily city needs, unless you travel long distances regularly. The range of electric cars varies from 50 Km to over 400 Km.  According to the Australian bureau of Statistics the average Australian about 38 kms daily. With EV charging stations available at home and being more accessible its easy to see why people are turning to electric . Every Electric outlet is a potential source of charging
9. It’s cheaper to charge
The price of electricity in Australia is about $0.21 kWh.

Petrol cars in Australia typically use 11.1 litres of fuel to travel 100kms based on the Australia Bureau of Statistics.

10: Energy independence
The technology to power your EV with solar power is already available. The investment in solar panels pays off faster when the solar power is not only replacing grid electricity, but replacing much more expensive gasoline
Reduced reliance on global oil which increasingly comes from volatile regions around the world.
Australia has an abundance of sunlight and land to use for Solar Electricity and Wind electricity generation.
Electric vehicles mean we are no longer reliant on foreign oil

10 great reasons to buy a new Electric Vehicle. You’re saving more than just the environment. For all your EV charging and accessory needs give the team at EVE a call.

EVE Australia offers units in various ratings, with differing features and capabilities – the smallest being 4.6kW right up to 22kW connected commercial grade units and everything in between. So what does this mean for you, and your installation? First we need to clear up the difference between AC & DC charging. Standard residential and […]
Read More