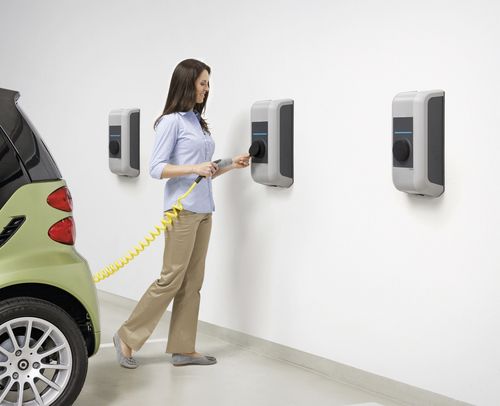 5 Reasons to Choose a Keba Wallbox for Work

Current electric vehicles on the Australian market come with either one of two variations in EV plug types. The plug type is what determines which type of charging connector and the capacity available for charging be it single or three phase chargepoint

Type 2 (Mennekes) plug is a less common plug type seen on Australian roads, but has the added advantage of being capable of three phase charging, which leads to faster charging rates. This is the standard charging plug type all across Europe and the EU. The current electric vehicles on the road which use this plug include: Tesla Model S, Tesla Model X & Renault Kangoo ZE.

A Universal Wallbox charger therefore allows you to accept any electric vehicle on the Australian market regardless of its plug type, provided the driver has an appropriate ev charging cable.

Think of it as the USB charger of electric vehicles.

2)   Less wear and tear on your infrastructure investment

When was the last time you saw the air hose at your local service station neatly wrapped around the hook? Yeah, I haven’t seen that either. It is normally strewn across the parking lot by the last driver too lazy to place it back. The same goes for hardwired EV charging stations, the cords will often be left on the ground which make them prone to damage.

Protect your investment by not having a tethered cable.

Cords used in public applications would necessitate checking and tagging on a regular basis. They also represent a trip hazard for EV drivers and the general public. The charging cord will lock into the vehicle and the charger during a charging session, and wont allow a driver to drive off with a cord still attached.

It’s a simple plug and play system. Plug into the charger, followed by the car then follow your vehicles standard charging protocol.

5)   It’s the standard across Europe

Its clear and obvious that Europe is the worldwide leader in Electric vehicles and EVSE. They have adopted EV technology with EV penetration up to 60% in some countries and mandates to phase out Internal combustion engines (ICE) completely by 2020. All across Europe many public-charging stations placed in businesses, shopping centers, car parks and municipalities utilize this universal ev charging wallbox set up.

Why recreate the wheel when we can see an effective, simple and safe system already exists?

6 Benefits From Having a Home EV Charger

Owning an electric vehicle is a great decision. EVs are far better compared to petrol-run vehicles. It’s good for the environment, economical, and easy to maintain. But, many are still hesitant on the thought of its difficulty in charging. As the EV industry grows, more and more charging stations are being constructed in key locations. […]
Read More