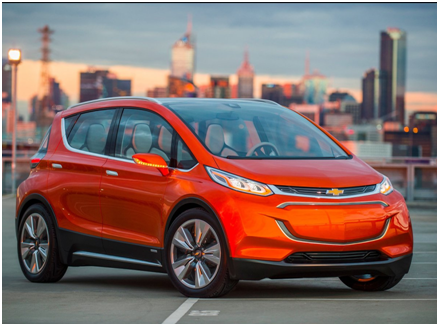 Holden (Chevy) Bolt the future electric car for everyone?

The Chevy (Holden) Bolt was un-veiled at the Consumer Electronics Show (CES) in Las Vegas this week with journalists and car enthusiasts glowing with positivity about the electric car. Following on from the Holden Volt, the Bolt represents an affordable option that will eliminate electric car range anxiety and offer the latest technology to its customers. an electric car charger will provide 40km of range per hour of charging.

According to Chevrolet, the five-seat (Holden) Bolt will have a range of more than 321km and takes nine hours to fully charge. Considering most people travel less 100km a day, this increase in range should help to ease concerns regarding range which plauge most of the affordable electric cars in the Australian market.

The battery is packaged below the vehicle for even more room and a flat floor which help to maximize cabin space which clocks in at an impressive 94.4 cubic feet. The bolt also features a first for chevy with rear camera mirror and surround vision.

The rear camera mirror uses a new lens on the back of the liftgate to provide a wide-angle view behind the car, which is projected across the entire rear view mirror.

Surround vision uses four cameras to create a 360 degree view around the vehicle that a driver can use while parking.

This new model Holden Bolt electric car will be bringing the fight to the Tesla Model 3 as a mass market electric car with meaningful range and an affordable price range. “It’s bringing 200 mile (321km) range to everybody,” said Darin Gesse, product manager for the Bolt. “It’s for the masses.” an electric car charging station is required to provide the maximum charging speed.

“It’s almost like treating it like your cellphone,” Gesse said. “You come home, plug it in and it’s ready for you the next day. You can make a long-distance trip and make those extra errands you wouldn’t be able to in a normal EV.”

The Australian electric car market may have to wait some time to see this model rolling around the streets of Sydney, Melbourne or Brisbane, with EVE Australia predicting a release date of somewhere between 2018-2020. The Bolt will be able to take advantage of electric car charging stations across Australia.

The German Automakers are coming to party on all Electric SUVs, but can they take down Tesla Model X? Despite the fact that most of them will never see a dirt track, let alone serious bush trails, We all know that Sports Utility Vehicles (SUV’s) are all the rage here in Australia. The next evolution […]
Read More