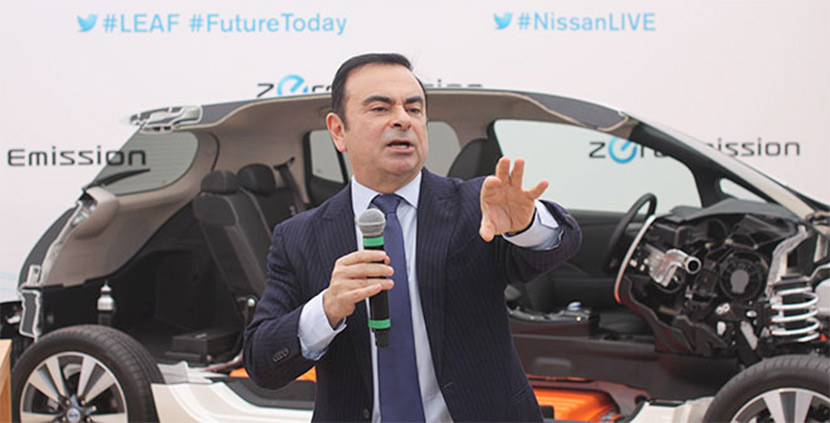 Much of the press coverage about EVs these days concerns European automakers’ putative plans to produce luxury sedans and SUVs to compete with Tesla. However, the world’s leader in EV sales has other ideas. The Nissan Leaf is the world wide leader in EV sales and is charged overnight by a Nissan charging station

Asked by a journalist at the recent Tokyo Motor Show if Renault-Nissan planned to build a large luxury EV to compete with the Model S, CEO Carlos Ghosn said, “No, you’re not going to see that. Frankly we are concentrated on the mass market, the core market. We think that going niche is very small volume, and there is already somebody doing a good job there, so why go after the segment?”

“Most of the market is in the mid-size sedan and the family sedan [segments],” Ghosn continued. “If we want to move somewhere, we’ll be moving to crossovers, which as you know are becoming much more popular everywhere. In Europe it’s booming. In China it’s booming.” Nissan plans to manufacture the Gen 2 Leaf and new Nissan Ariya. They will also provide the ability for a Nissan charging station to be installed at home or work to maximise convenience for their new owners.

It seems that the on-again-off-again Infiniti EV is off again. “I don’t think you’re going to see us soon in premium electric cars,” said Ghosn. “It may happen one day…this is not our priority.” The new Nissan Ariya will also be the first Nissan powered with a CCS2 Charging port allow fast DC charging of the Nissan Ariya. Furthermore a Nissan Ariya charger will provide a 7kW charge or roughly 40km of range per hour.

What’s with the Porsche Taycan EV?

Back then, the thought of being an advocate for a greener atmosphere and a fan of petrol-guzzling vehicles seemed to be impossible. Now, the idea of being an environmentalist and a sports car enthusiast finally comes to fruition. One of the most sought EV sports cars is now on the road. Fully charged from the […]
Read More

Like the rest of the world, BMW is intent on transitioning into the EV space. Even with Australia lagging, it’s an important market to get a foothold in and could very well define BMW and their competitors’ success in the next decade. So, what is BMW doing? For starters, BMW is launching new models into […]
Read More